Our Stories – Safer at Home 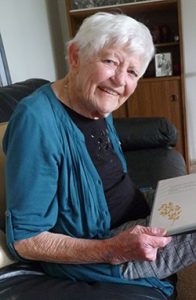 Val and her husband moved to Wollongong in 1968.  Val was a maths teacher and her husband was general manager of Illawarra Newspapers.  They raised a family, with their children and grandchildren now scattered around Australia.

Val’s experience with her husband led her to become a dementia advocate and support other family and friend carers.  Through the carer support group, she is able to share this experience and support other carers who are in very difficult situations and feeling forced to make heart wrenching decisions for the person they love.

Val’s own experience shows the importance of getting care at home and is backed up by the stories of the carers she supports in her group.

“Being able to get small amounts of support at the initial stages is really important.  Transport to go shopping or a twilight outing.” explains Val “People get desperate and they can’t get the care at home – they feel that they have no choice but residential aged care. I could have cared for my husband at home for much longer if I had more support.”

Not getting the support you need at home forces people into residential aged care.

As for herself, Val says, “With a bit of support at home, I’m never going to residential care!”

Val’s social and community activism would put many younger people to shame.  At 91, Val runs a local carer support group, she is a dementia advocate, a COTA aged care navigator, dementia event organiser and member of the OPAN Reference Group member.  She is able to continue to live independently at home and keep up with her work in the community with a modest amount of support and services. Some support with housekeeping and transport assists Val to remain well and keep connected with her local community.

David, 76, is one of 16 children.  He left school young.  He spent his early working life as a coal miner on Tasmania’s north west coast before moving to Kalgoorlie for several years. However, once married, David and his wife decided that life in Tasmania was better for them and their young family.  He spent the remainder of his working career as a factory worker. He took great pride in being a hard worker and supporting his work mates wherever possible.

David was also actively involved in helping family members and neighbours.  He enjoyed being there for others and helping them wherever possible.

David has multiple health issues and needs knee replacement surgery. However, due to a persistent foot ulcer the surgery is on hold. In the meantime, David mobility has been severely limited, and he is experiencing constant pain which is having an adverse impact on his emotional wellbeing.

David is determined to continue to live independently.  He dreads the thought of entering residential aged care.  As he told his daughter,

When I know I am getting close to no longer being able to look after myself I will wander off into the bush.

With encouragement from his family, David applied for and has been assessed as eligible for a home care package.

David has told his daughter that the thought of receiving a home care package is some  days the only thing that keeps him going. He sees the home care package as providing him a life that accords with his understanding – a life worth living.  He is particularly interested in experiencing the flexibility the package will deliver in enabling him to prioritise how his package funds will be spent, not just in the first instance but as his needs change. He is reassured knowing that the services he chooses can be changed as his needs change. In the past David receive CHSP but found the service choices offered restrictive.

At present, while awaiting surgery, David loves the thought the package will help him to purchase equipment and aids that will enhance his mobility.  This will go a long way in restoring his sense of personal control.  David is not against receiving help and support from others, but he longs to get back out into his garage and fix things and feel useful

For David a home care package represents the freedom to be independent and live the life he wants to live.

I was an advocate for my friend.  She died about 18 months ago waiting for a home care package.

At 76, my friend had a fall at home and was taken to hospital.  Whilst in hospital she had another fall and a stroke.  She was discharged from hospital into the care of her husband who had just had cardiac surgery.  The hospital made no effort to make sure she was going to have the care she needed at home.

It took eight weeks for an aged care assessment for services at home with a recommendation for fortnightly housekeeping.

My friend was hospitalised again, soon after this she died waiting for the supports she needed.

Too little, too late.

Rosemary and Donald had been married for 53 years and spent the last 35 years living in the Macedon Ranges in regional Victoria.  Donald had Lewy Body Dementia and he passed away recently in residential aged care.

Rosemary describes the obstacles she encountered in trying to get supports to continue to care for Donald at home as his dementia progressed.  “Initially, I was relying on doctors to help.  The education in dementia and what carers need is just not there. I felt like I was running blind”

Eventually Rosemary was able to join a carers group.  The group was supportive and became a social outlet as well.  This became really important at Donald’s dementia progressed “people didn’t understand how to communicate with him, and eventually we became isolated within our home.  Friends and relatives dropped away.”

Rosemary says, “I was always positive about continuing to care for my husband at home, however due to the symptoms of his dementia, the demands became greater and I became more exhausted.”

Rosemary applied for a package of care, but it never came.  Donald was eventually forced into residential care.

“What I really needed was to be able to devote my time to Don within the home, with home care services to support me, such as cleaning or preparation of meals, while I was caring for Don, and even some company for Don to have other than me all of the time, so that I could rest in between caring for him.”

“ I was also too exhausted to continue fighting for these services, and constantly hit obstacles in trying to find help and support.”

Mum and dad migrated to Australia in 1965.  By the time they arrived in Melbourne, there were 7 of us – 3 boys and 4 girls.  There was so many of us that mum’s main role was looking after us and keeping house.  Mum was active in the community and in our church.  Most of us have moved out of home, married and have families of our own now.  When dad died about 20 years ago, mum was still really fit, well and active.  She was going to church regularly and even babysitting grandchildren.

Over time many of her close friends have passed away and mum has become less active in the community.  She had her first fall about five years ago and she broke her hip.  We made changes to the bathroom, toilet and kitchen to make is easier to be at home and mum was able to get some help.  From this time, she used a walking frame which made getting around easier.  With a bit of help from us to do the shopping and taking her to appointments she was doing fine at home.

About 12 months ago, mum had another fall and needed another hip replacement.  In hospital she came down with pneumonia and we thought this was the end.  She recovered from the infection but now also needed rehabilitation to walk again.  At 89, the staff at the hospital didn’t give her much hope and when she wasn’t back on her feet within 6 weeks they told us she has to go to a nursing home.  We thought that she would be able to go home with some more rehabilitation and some more support at home, but in the end, we had to find a nursing home.

There is a positive side to this story.  It took a while, but mum was able to get the rehabilitation she needed in the nursing home and she is up and walking with her frame again.

“She now doesn’t need to be in a nursing home anymore, but now there is now no home to go to and even if we could take her home there is no package to support her.” 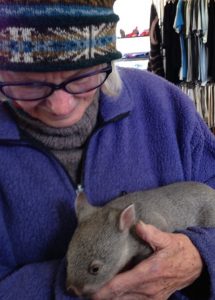 As a practitioner and teacher of occupational therapy, Jennifer has a unique perspective on being safer at home.  Jennifer’s career as an occupational therapist took her from her home in the UK to the USA, to Canada, then to Australia.  Initially lecturing at the University of Queensland, she settled in Tasmania in 1984 and has been there ever since.  So, she looks at her current situation and her desire to live at home for as long as possible from a personal and professional perspective.

Jennifer says, “busy people don’t retire, they find other jobs that they don’t get paid for” and she keeps herself connected to her community and is actively involved in her networks.  More recently, she was involved in writing a joint submission with her peers to the Royal Commission.  “Too rarely do older people get involved in the way they are projected”.  Jennifer and her network of peers see the importance of being heard and staying connected.

Jennifer says that, “I am allergic to being patronised” and at my age it is “important to preserve autonomy”.  A modest amount of support with housekeeping once a week has been enough to keep Jennifer safe at home.  Having worked in different health settings and having her own experience in respite following an illness, Jennifer is adamant that “it is not possible to live in an institution and still be independent.”

“Of course, it is better and safer to stay at home longer.  It is not just the support, but the design of homes and the community.  I have seen other places where the whole village has helped care for the person at home.”  Jennifer recognises this is not always possible but a network of formal and informal supports are important.  To do this we need more funding for care at home.

When asked how she would react if residential aged care was the only option, Jennifer said,

I wouldn’t accept it.  Have all the options been exhausted? I would use all my money to stay at home.

“All my friends in care were diminished by that experience. I asked one to provide information for the Commission, a previously assured, proactive person, she felt unable to do so, her experience of making constructive suggestions had been so negative.” Jennifer says you either comply, or you are a labelled a “groaner or moaner. I dislike bingo, but otherwise I spend too long alone.”

Skip back to main navigation